Closing day we got in some sunshine and showed some punks how to rip.  Check out this article on Proboard by Tennille Barber on Get Rad Revelstoke, originally published here.

I have to be honest.  I’m totally a winter person.  When I was invited to check out the last weekend on Whistler’s glacier and take pictures of people riding park, I had to say yes.  Never been to Whistler to ski and I am really missing the snow.  A cheap pass, 2 lifts, 1 dusty bus ride, and another lift later, I’m looking at a glacier turned into a snow park with some massive jumps, lapping a t-bar amongst a plaid parade of punks.

The Camp of Champions had brought a crowd of some pretty serious young athletes out to play.  Everyone had their A game cranked to go time, and the average age there had to be 17.  The feel of the crowd was different in the park entirely than what I’m used to.  Maybe it’s something about the balls it takes to get that much air time.  Riding with Proboard creator Greg Ryan, there were some very curious looks as he walked through the lineup carrying his bindingless product to get on the t-bar which he mounted effortlessly.  A simple and still impressive feat even considering I had just watched him launch off a butt puckering jump.  You could tell many wanted to know more, so a couple would ask for the rest around them.  He’d describe it as feeling like a blend between snowboarding, skateboarding, and surfing at which point many would exclaim, “Whooaaaaaa dude… no way!”  The bindingless revolution has yet to hit Whistler or at least, Whistler’s park.  The greatest thing about athletes when they hit a couple decades in their sport is the creativity that results in new ways to ride.  Greg and his free Sorel clad feet definitely inspired a couple minds in the crowd, but in many instances I’m sure a lot of them had no idea what they were seeing.  A pretty familiar sight to the people in Revelstoke, we’ve observed and adored a special few of our athletes taking flight or maching without their feet secured.  As for bindingless flight in the park, maybe it’s just the Proboard that’s got wings these days. 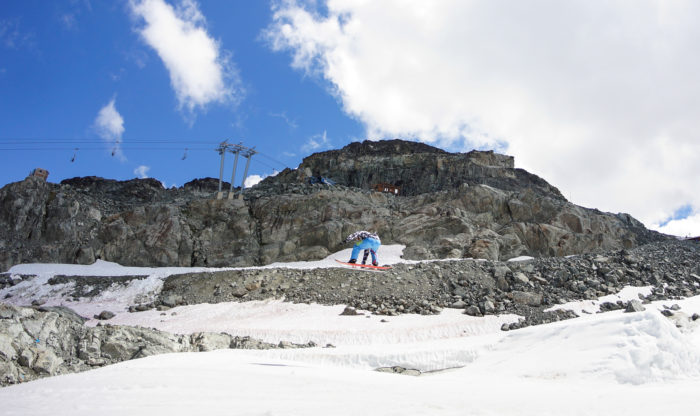