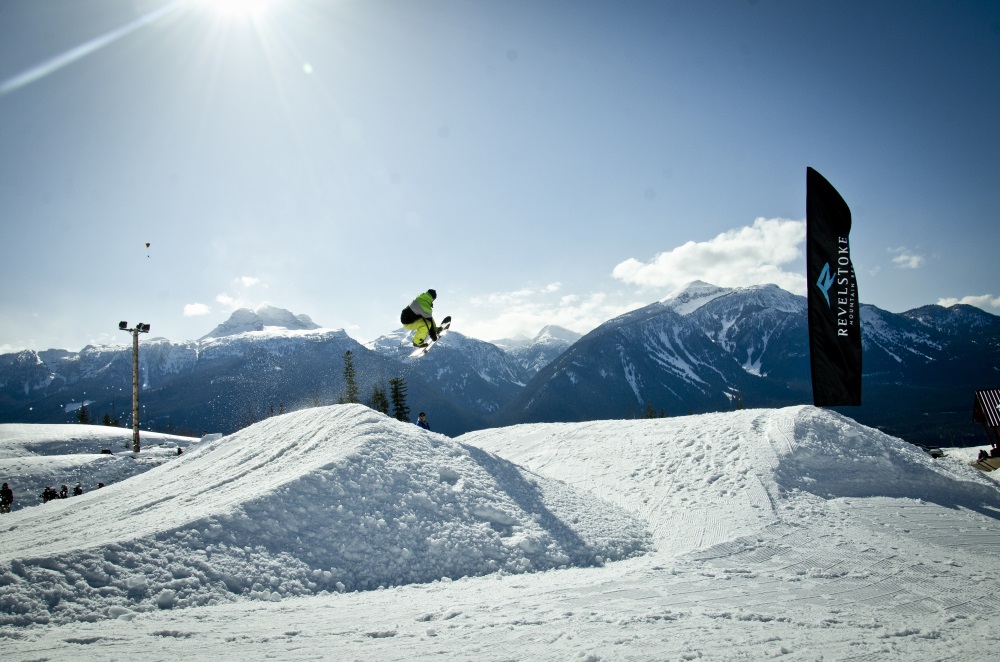 Soul riding is a term I’d thought had applied to a sport itself, however, I think I’ve discovered it may apply more to the person riding than the sport.  Have you ever met someone who’s really passionate about not only riding but a creation of theirs that allows them to ride exactly how they please?  These are the people who will push sports in new directions with outside-the-box ideas and willingness to experiment.  They aren’t afraid to fail and go back to the drawing board to try something else.  These riders are essentially artists who will inspire others to ride in new ways.  Greg Ryan and ProBoard aspire to do just that.  I met up with him on a sunny patio to drink beer and talk shop. 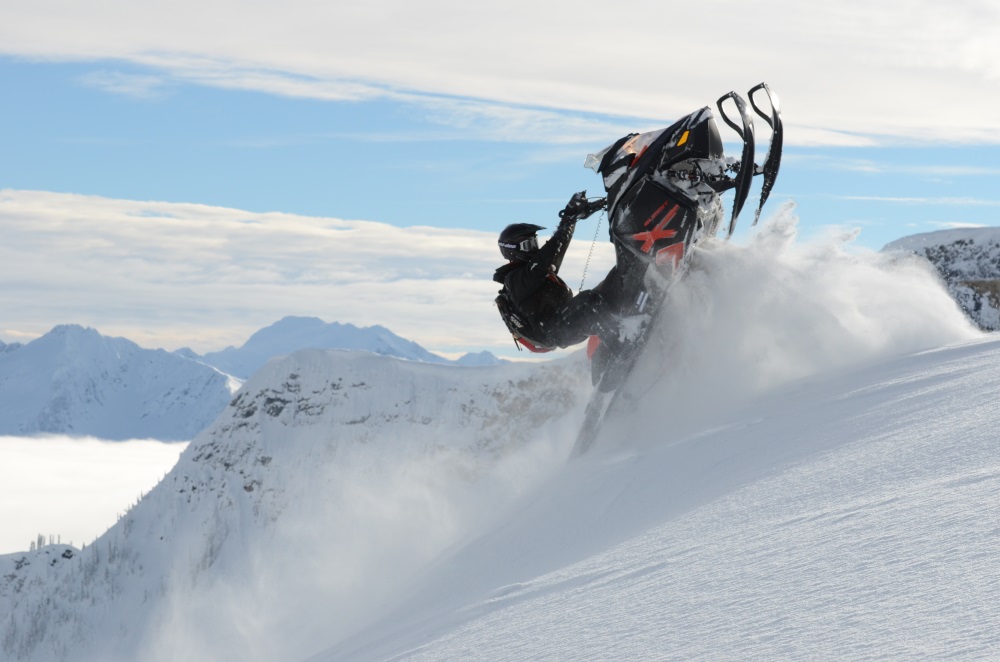 On the Skidoo site repping the 2014 lineup Photo: Rob Alford

Greg was born in Quebec and grew up in Alberta.  In the winter he works in the snowmobile industry at CKMP which helps supplement his goals with Proboard.  He was recently featured on the cover of BRP’s 2014 catalog.  He’s been snowboarding since he was ten, which prompted me to ask, why change now?  He stopped two years ago pretty much completely after constructing his board.  When I asked what inspired him to make the ProBoard, he replied, “I guess I was searching for a feeling that I had when I was a kid and started snowboarding.”  I can’t imagine a better answer.  Everything when we were children was so interesting, shiny, new, and exciting.  He runs through a list of what he’s done on snow and water, basically anything with any type of speed or air.  Seeing Greg participate in competitions this season bindingless has been totally wild.  I’ve been a party to seeing him grind rails, jump gaps, and fly off hips.  I literally know of a time when 5 photographers took a picture of him in the air simultaneously, all simply in awe. 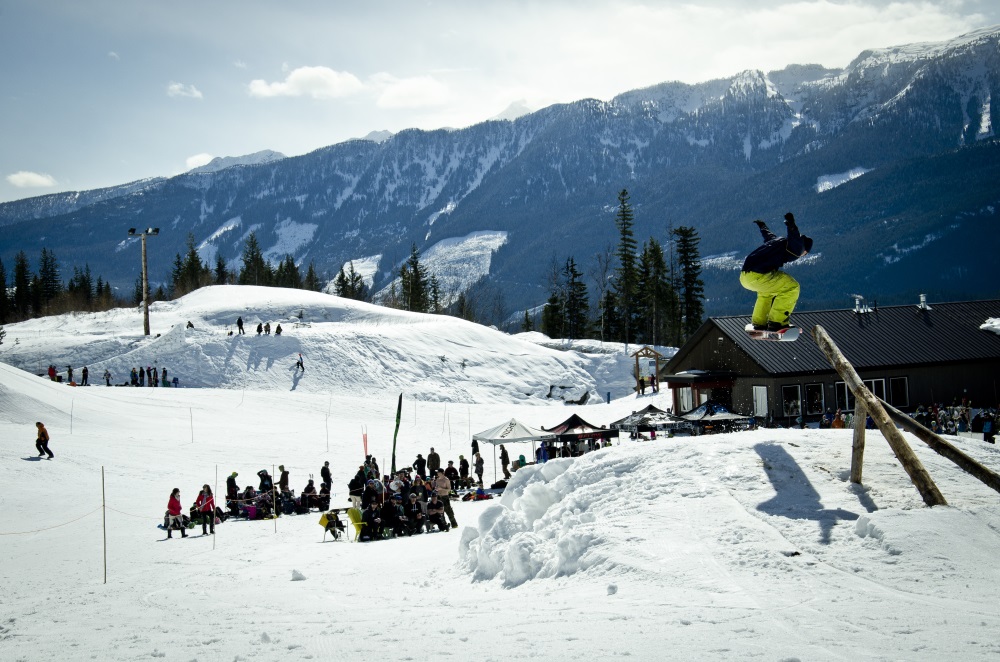 A lot of discussion has been had on the types of grip you use for bindingless traction.  See my article on it from earlier this season here.  Seeing as how Greg moves all over his board all the time, he likes to use the carpet protector, or what he calls his “Spike Mat” option.  EVA foam, comparable to yoga mats, is layered underneath to create a better connection with the board, allowing your boots to sink into it a little.  The only thing missing from this option is durability.  The little spikes break off too easily.  He aspires to manufacture his own type of bindingless traction for this reason, stating the others simply won’t work for the type of riding he wants to do.  Watching him fly off the jumps, he is adjusting his feet slightly the entire way in, which means the traction spots can’t be limited.  His goal was always to make this product rideable in all conditions.  “Any surfer will tell you, on a calm day, they’re way forward on the board and they’re just smooth, cruising on the water.  On a rough day, when it’s wavy, they’re back and they’ve got alot of weight on their back foot so the nose of the board is jumping over all the choppy water and that’s their ability to move and manipulate the board for the conditions.  That’s why I like the Spike Mat, you can go out and hang ten on it.” 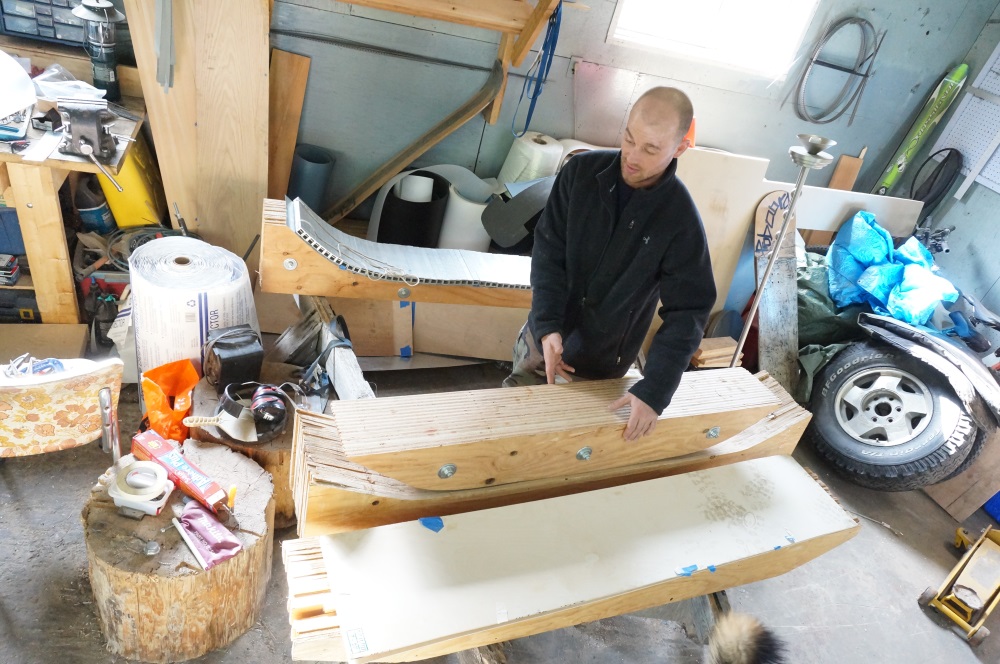 The construction of the body has been a challenge.  “I had a tough time getting it to look the way I wanted to.  Not like a skateboard deck with a jumbo ski underneath it, but a unified board style.”   Since there are two parts to the board, a subdeck and a topdeck, there are two presses.  The topdeck is more like a skateboard.  It’s concave with the same horizontally laminated baltic birch and oak combo plys with alternating grain directions for increased strength. 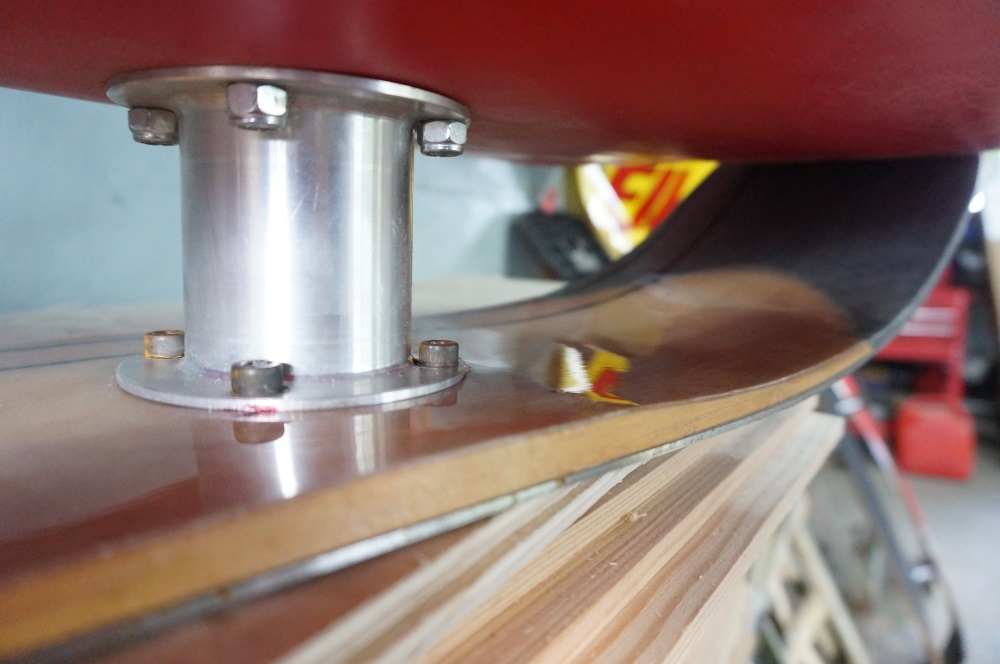 The “Circle Strong Trucks” are machined locally, Greg’s design with Lou Brown’s craftsmanship.  Made from machined T6 aluminum, these were redesigned three times to ensure they’re the lightest possible weight with the best snow shedding capabilities. 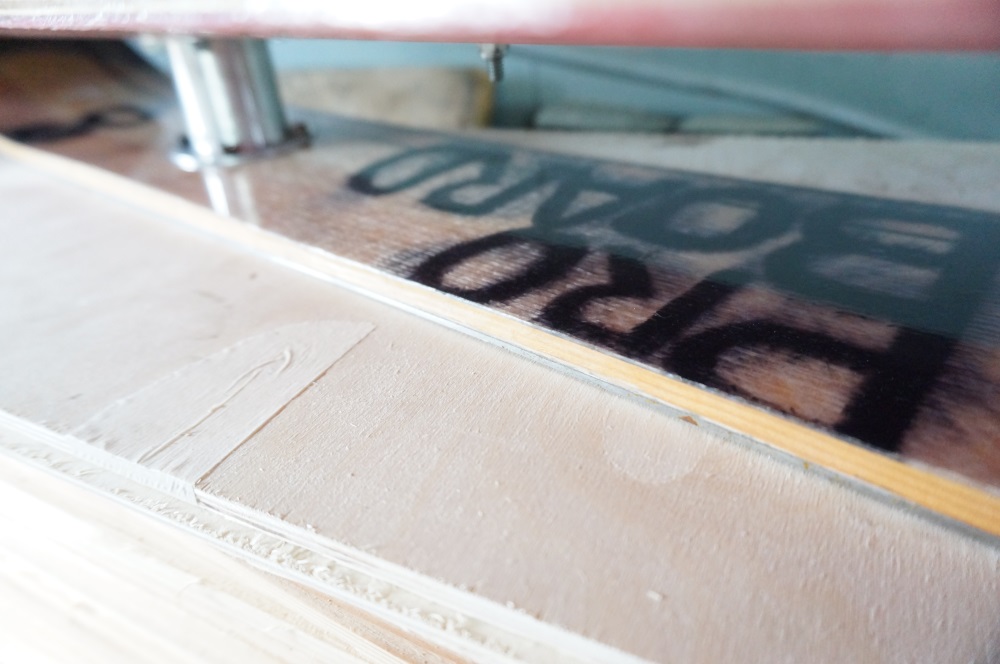 The top of the subdeck Image: Tennille Barber

There is a waxable P-tex base on both levels of the board so that they glide evenly through the snow, special for Revelstoke pow.  The board is shorter than the average snowboard which allows for ease of manipulation in different snow conditions.  The dual gliding surfaces help to keep it afloat.  The “Supertip” on the subdeck prevents the snow from gathering under the topdeck by rising above it from the bottom.  The bottom is made from Sintered 4000 P-tex while the top is made from Sintered 2000 due to the fact that it’s not taking the same type of abuse as the top.  The core of the ski is made with heart wood from “Take to Heart”, here in town, locally milled. 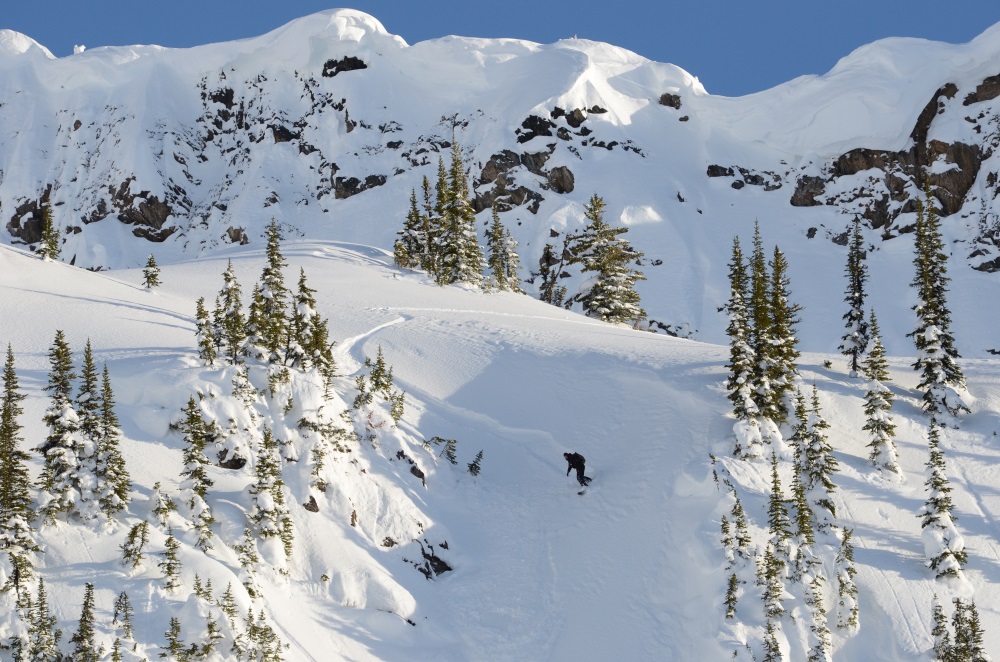 “It feels like you’re hovering when you ride it pretty much.” A new age snow hoverboard?  Sign me up.